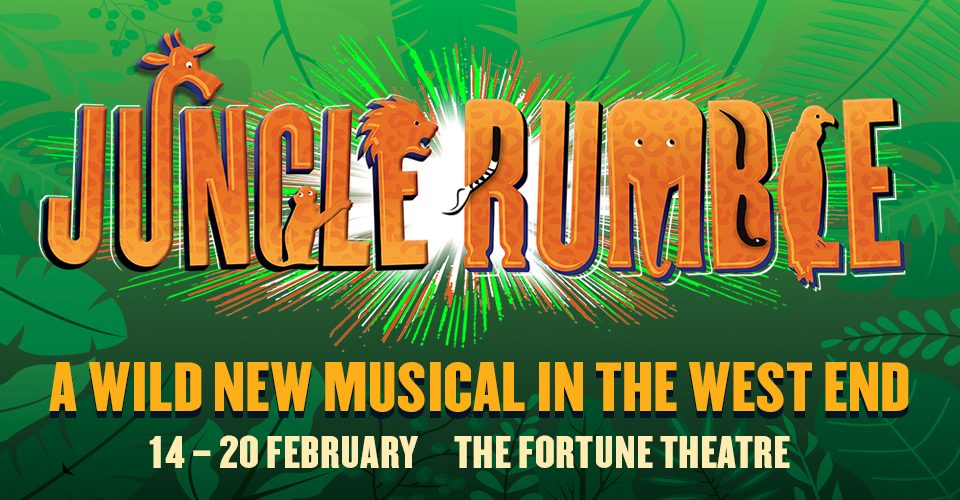 JungleRumble, a new family musical featuring an inspirationalmessage about working together to protect the Earth, will run this half term from14 to 20 February 2022 at The Fortune Theatre in London’s Covent Garden.

Featuring a talented line-up of professional performers, uplifting songs and thrilling choreography, Jungle Rumble tells the story of ancient elephant Eeli, shy zebra Zella and cheeky monkey Boo. They journey deep into the heart of the jungle on a fearless expedition to rescue Snow, the last white lion, from the evil Lord Braggard.

Produced by Perform Productions, as drama school Perform’s debut West End show, Jungle Rumble marks a natural progression for the highly-regarded drama school founded and run by Lucy Quick and Will Barnett, leading the way within the industry in making such a move.

Perform runs children’s drama classes for ages 4-12 across the UK. Jungle Rumble, which is written and composed by Will Barnett, ties in with the students’ jungle theme this term, bringing stories and songs of the jungle to life by professionals on the West End stage.

The cast of Jungle Rumble is Sharon Ballard as Eeli, Callum Evans as Ensemble,Darren Hart as Cheetah, Michael Lin as Boo, Carole Stennett as Snow/Ester, Ben Stock as Lord Braggard / Boss and Joy Tan as Zella.

Jungle Rumble is Directed by Susie McKenna (current Associate Director at Kiln theatre, former Creative Director of Hackney Empire), with Choreography by Frank Thompson (Blues in the Night, The Bodyguard),Design by Lotte Collett (Hackney Empire Pantos, Blues in the Night ), Lighting Design by Simisola Majekodunmi (J’Ouvert) and Sound Design by Tom Marshall (The Drifter’s Girl, Nativity! The Musical). It is produced by Perform Productions and General Managed by Anthology Theatre.

Jungle Rumble offers a perfect half-term day outfor the whole family. It runs from 14 to 20 February at The Fortune Theatre,Russell St, London (Covent Garden) at various times during the day (runningtime 45 minutes).

To book, or for more information, visit: