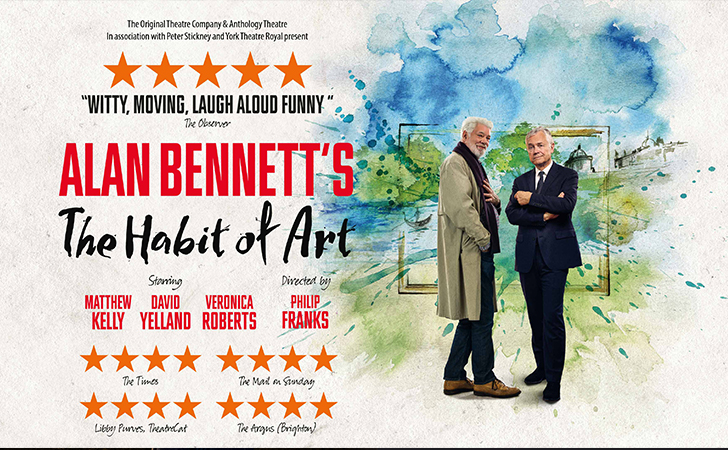 The Habit of Art

Alan Bennett is one our greatest and most celebrated playwrights, with a cavalcade of stage and screen blockbusters including The History Boys, The Madness of King George and Talking Heads. He is applauded as a genius for his sharp character observations and treasured forthe way he beautifully balances wit, wistfulness and compassion.

In The Habit of Art, Bennett givesus a play about a meeting between the poet WH Auden and the composer Benjamin Britten.

'Original Theatre has done it complete justice. This is one of the most impressive theater webcasts'

‘The result is a take on life,sexuality, death and everything, that is witty, moving, laugh-aloud funny and understatedly profound… the cast uniformly stunning’

‘Kelly and Yelland are on top form heading an ensemble who highlight the way that art is both magical and mundane…ambitious, revealing and hugely entertaining.’

‘It’s sharp, and often funny,teasing and important. The play holds up, even better, ten years on.’

‘Thought-provoking and expertly played, this is not a production to be missed.’

‘The whole cast  gave a performance that was both thought provoking and funny.’